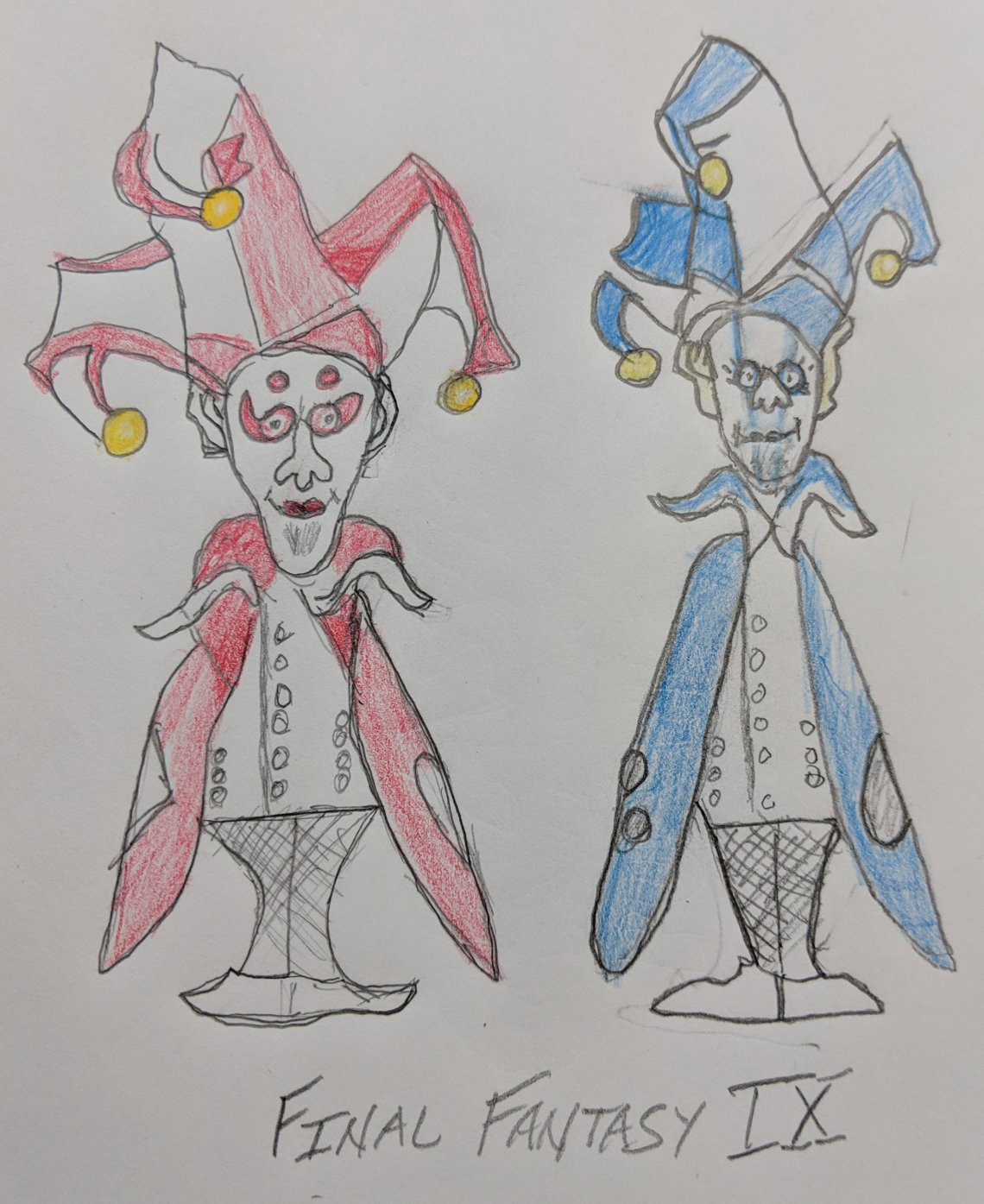 This game took me forever to beat, but not because of its difficulty. Basically, I owned it in my teenage years, and made it to the point where you switched from disc 3 to disc 4. Upon putting disc 4 in and closing the drive, nothing happened. The screen was black. It was a bad disc. I didn’t want to stop playing the game, but I wasn’t about to buy a new copy of FFIX for one disc.

Years later the Square Enix Store had a sale. I was surprised to see they still had Playstation 1 games. I picked up Chrono Cross and Final Fantasy IX, but didn’t remove either from the shrink wrap realizing the collector’s value. Very recently a friend lent me FFIX disc files that work with an emulator. I didn’t have ethical concerns because I already own it and still do. Last night I beat the final boss, and this morning I watched the ending. Ta… da?

Sachaguchi says this is his favorite Final Fantasy, and compares it with the older games. I can understand the comparison, though this is the only Final Fantasy I’ve finished, so I’m not as familiar with the older games. There is a theme of medieval Europe in both, and there is a travelling theater troupe, which can feel Shakespearean (I recently read Romeo and Juliet).

It’s a good cast of characters. Zidane is the main character, who has an undying love for the Princess Garnet, but doesn’t know how to show it. He along with his theatre troupe kidnap Garnet at the start of the game, and she stays in the game till the end. Garnet changes her name to Dagger at one point, to disassociate with the kingdom in Alexandria from which she came, and later ran away from, including her mother, Queen Brahne. Meanwhile Steiner, a knight from Alexandria, feels a civic duty to protect Dagger. Vivi is a character who is always questioning why he was made. At a point in the game, you reach a factory that’s mass-producing black mages (like Vivi).

Among the lesser characters is Freya, who is trying to find a love of her own. Quina is comical. No one knows if Quina is a man or a woman, and all he/she is interested in is eating things no one would think to eat. Eiko is a spirited young girl raised by her grandfather until he died when she was five, after which was raised by moogles. She has white magic like Dagger, the only other character with this skill. Amarant is a total mystery, and he lives for combat.

The central plot uniting the characters is that Queen Brahne is involved in the mass production of black mages to assist the mysterious Kuja. You learn more about Kuja as the game progresses. He is from the dying world Terra, while your party is from the very alive world of Gaia. Kuja has weird dreams, and thinks life and death should be united, and basically (spoiler alert) reaches the end of the universe to complete this union. Though he is rather evil, he is nowhere near as bad as Sephiroth, for example.

The combat is like that of a classic RPG, but if you sit around tactically deciding one characters move, the enemy will get multiple hits on you. There’s a real-time element to it. Zidane is the best at plain old attacks, though he can steal, which is nice if an enemy is carrying something of value like a tent. A tent can house your party at a save point, more or less reviving all HP and MP. He also has basic “skills” like fleeing a fight. Steiner and Vivi are a terrific combo. If memory serves, Vivi can empower Steiner with black magic, and Steiner is much more powerful his next turn. White magic is, as you may have guessed, mostly healing magic, and if you really need healing, you can bring in Dagger and Eiko, too.

Freya has a move where she jumps to incredible heights and crashes down to the enemy with her spear. It takes a few turns before she crashes down though. Her being in the air makes her immune to damage. If the enemy wipes out your entire party, but Freya is still in the air, it’s like a second chance. Amarant can do a lot of damage, but because he’s the last character you pick up, I didn’t use him in combat that much. Quina is sort of a joke.

You visit fascinating locations in FFIX. There is an overworld, and it’s easy to get lost. Aside from the very grand Alexandria, there are fun places like Treno, where there’s an auction house, and theme excellent music. There is Black Mage Village, which ends less tragically than mass-produced black mages. Lindblum is a massive city with a theater district and a business district. There are also many battle-heavy regions to level up your characters and pick up cool items.

Final Fantasy IX is a big roller coaster ride, and the best advice I can give is that you play it. It is my first Final Fantasy that I have finished, though I did play Sakaguchi’s Blue Dragon (Hirinobu Sakaguchi worked on Final Fantasy I through IX), which is a bit like Final Fantasy for kids. I do want to play the other titles, but this is a beautiful package, cementing Squaresoft’s commitment to the PlayStation, though they would later make offshoot Final Fantasy games like Crystal Chronicles for Nintendo. Rare that we see such a long-running series still have strength this far in. It gets a big endorsement from me.
5/5