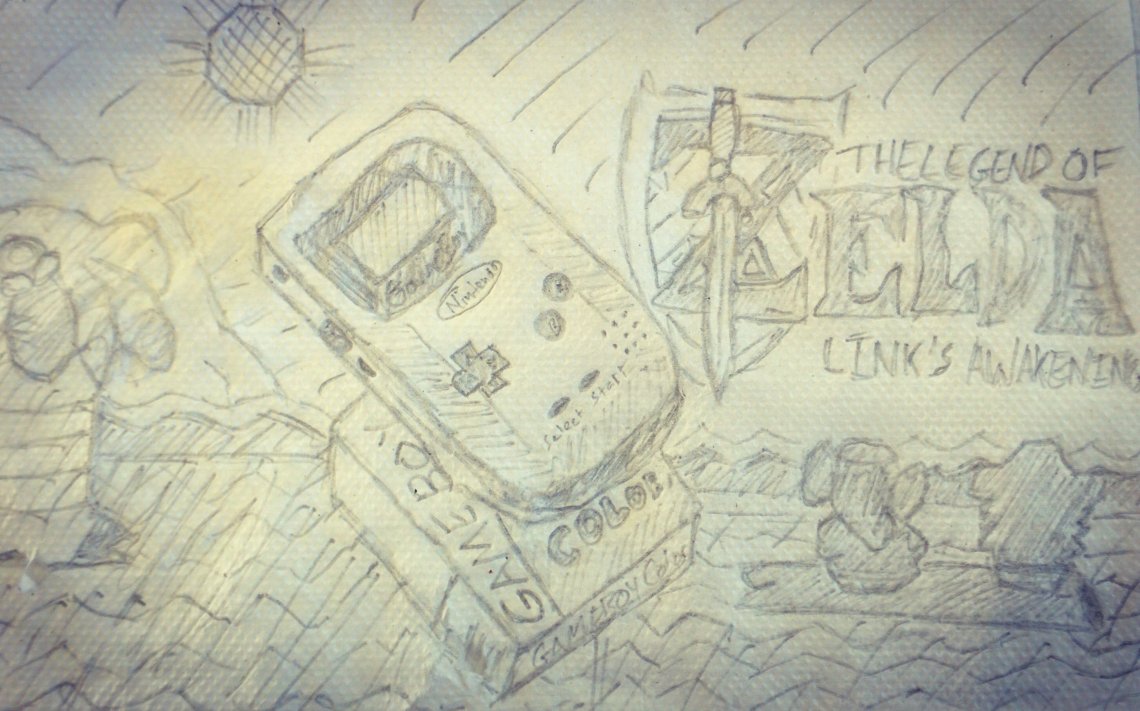 The Game Boy Color didn’t have a long enough lifespan. It was released in 1998, and two years and eight months later, the Game Boy Advance came into existence. The Legend of Zelda: Link’s Awakening DX looked like it could be the start of something beautiful with the Game Boy Color: colorizing many old Game Boy games. The DX was short for “deluxe,” which meant that it was an older game that had been enhanced with color. Though we got Tetris DX, R-Type DX, and Super Mario Bros. DX, it wasn’t the boon I had hoped it would be to breathe new life into an old catalog. Regardless, we can take Link’s Awakening DX as the treat that it is, a brilliant, A Link to the Past -inspired Zelda, that in many ways bested its inspiration. All made more beautiful with color.

The plot is simple, and I am grateful. Link is riding a boat across rough waters in a rainstorm, with no explanation as to why he’s there. The storm is so fierce, he washes ashore on an island, with a resident of the island, Marin, bringing Link to consciousness. Marin lives with Tarin, and it might be a father (Tarin) and daughter (Marin), but we aren’t sure. They don’t seem to be husband and wife. Tarin gives you your shield, and you’re told that your sword is still on the shore. Once on the shore, you are greeted by the Owl, who tells you monsters have arrived on Kololint Island, which is apparently where you now are. The owl tells you that you must wake the Wind Fish. This is the first use of an owl in the Zelda series. An owl would be used in Ocarina of Time and Majora’s Mask.

The owl gives constant instructions on where to go. Though in some games I dread going into a dungeon, tackling the first dungeon in Link’s Awakening is a delight. I’d say the first five dungeons in this game I was able to finish without referring to a guide or an FAQ. The remaining three are a little more challenging. True to the formula that seems to have started with A Link to the Past, every dungeon is home to a new item, and you typically need to use the item to get the ultimate reward, a musical instrument that can wake the Wind Fish. There are eight instruments in all, one for each dungeon.

Music is a theme in Link’s Awakening. You need one nine-instrument song to be played next to the Wind Fish to wake the Wind Fish. This is the first Zelda to call an ocarina an ocarina. It is referred to as a “flute” in A Link to the Past. The in-game music is good, but you will find it repetitive eventually. All the while, some songs are specific to a single home, like the music inside Mr. Write’s house. Mr. Write was noted in an FAQ as an homage to the days of pen-pals, as Mr. Write spends his days writing letters. The game’s music was not written by Koji Kondo, but instead composed by Minako Hamano and Kozue Ishikawa. You learn three ocarina songs. One, “Ballad of the Wind Fish,” wakes the Wind Fish with the eight instruments. Another song, “Manbo’s Mambo,” if used in a dungeon, takes you to the start of a dungeon, and if used in the overworld, takes you to a central location. Finally, Frog’s “Song of Souls” can revive the dead. Cool, huh?

It’s actually quite impressive how much the Ocarina of Time development team brushed up on their Zelda history for Ocarina of Time. It includes an ocarina (of course), an owl offering guidance, fairy fountains, even a trading sequence, which is a big part of Link’s Awakening. It’s clear that A Link to the Past and Link’s Awakening were the blueprints, but it might have taken the most inspiration from Link’s Awakening, which is saying a lot about a Game Boy game.

There are minor grievances. Again, the music gets a little trite. Having only two items that can be used at once is rough. In dungeons especially, switching to the pause screen to change sometimes both items is a real hassle. The Pegasus Boots aren’t as useful as in A Link to the Past, and there was really one part of the map where it made things faster. And to be honest, the dungeons get hard. It’s really the last three that can have you losing hearts (health markers) far too fast. Still, I am willing to forgive. I’ve actually owned Link’s Awakening since I was about six, and was fascinated by the size of the game-world. Finishing all these years later is the ultimate reward.
There are strange writings in the text. Multiple occasions say that Kohorint Island might be only a dream or an illusion, and that by waking the Wind Fish, the island would cease to exist. An enemy tells you, “Same as me, you are in his [the Wind Fish’s] dream.” Another says “Remember that you, too, are in the dream.”

I’ll finish by saying there is a short list of credits, which I’m always happy to see. We’d be fooling ourselves if we didn’t say subsequent Zelda games like The Minish Cap or A Link Between Worlds weren’t inspired by the A Link to the Past formula, but I think Link’s Awakening needs to be fairly credited for sometimes revising and expanding said formula, a year later. It was the one Game Boy game that seemed so massive, I wondered if I would ever finish. Finally, I did.
5/5